To pizza or not to pizza?

Before starting this review I must say I am so sorry that some of my pictures from Rome got lost so instead of seeing how the pizza looks like there’s just a picture of a beautiful street. I could have uploaded a photo of me inside the pizzeria but I thought you’d enjoy this more.

A trip to Italy without eating pizza could or should be considered a crime.

For my trip to Rome someone recommended a Pizzeria situated on Via del Governo Vecchio 114, not far away from Piazza Navona. Now, I don’t usually chose places that are so close to main attractions in a city I visit but I decided to give it a try since the other recommendations for other restaurants had been right.

So arriving at the destination I noticed a few tables outside, full with people and I entered the place looking for a free table.

I was guided upstairs and from the start one thing must be told. Like in other restaurants here too you share the table. I was seated at a table of 8 and in 10 minutes tops another Spanish couple was sited at the same table.

This is not a problem for me, being used to this, sometimes great conversations can be held between total strangers.

The menu is not like I expected. When you say pizza, original pizza I can only think of 3,4 kinds of pizza that match this criteria. I am not a fan of rich pizzas, containing more than 3 ingredients. I personally like simple yet delicious pizzas made from 2 cheeses and a meat or a cheese a meat and a vegetable and so on.

The menu has different kinds of pizza, well suited for both meat eaters and vegetarians so that covers almost all tastes.

From what I remember I ordered a Pizza Baffetto and a Quattro Formaggi along with 2 cans of Coca Cola.

The pizzas came relatively fast and the first plus was there as well. Pizza at this pizzeria has thin crust. And this is a huge plus for me because I never eat pizzas with extra dough.

As far as the taste…the Quattro Formaggi was good. Not in the top 3 pizza I ever ate but it was good. I think the nicest touch was the use of blue cheese on it, giving it a special flavor that I enjoyed very much.

The other pizza, the Baffetto Pizza didn’t really impress me. Usually I never order pizzas with more than 3 ingredients but I made an exception here and tried this pizza. It was decent but nothing to remember it on the long run.

I paid 27 euros for 2 pizzas and 2 Cokes (one pizza was large) and frankly I cannot say that it is expensive considering this is Rome and the location is central and has plenty of history.

As far as the service goes it really didn’t bothered me but neither did it stand up so I really can’t comment on it. There was really very little interaction with the waiter and so I won’t fully grade this aspect.

The waiter was polite, the order came pretty quickly and the pizza was OK.

My verdict: the pizza is ok, the location is kind of cozy even if it isn’t exactly small. Because of the Quattro Formaggi I would probably give it another shot if ever in Rome again. 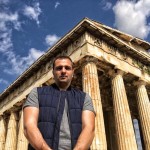 Looking for a decent hotel in Thessaloniki?